Club member Bruce AD4IT enlisted the aid of Chuck AI4WU and Chris KC4CMR in testing and aligning a GMRS repeater destined for use in Suffolk. The repeater, originally a commercial Kenwood radio was repurposed as a ham repeater before Bruce acquired it. Now destined for a return to GMRS service it needed a bit of fine tuning. The major effort was in realigning the IF amplifier which had to move upwards over 20MHz. Complicating the alignment was the fact that there were six coils that acted both independently and in conjunction with one another. Once Chris got the hang of it the IF bandpass filter moved nicely from the 440MHz to the 467MHz band and met the specs found in the service manual. Other test and adjustments included frequency, duplexer operation verification, FM deviation and power output. The work took about four hours but everyone had fun and learned a lot. Many of the adjustments were made from computer software with a simple interface through the repeater’s front panel microphone jack. 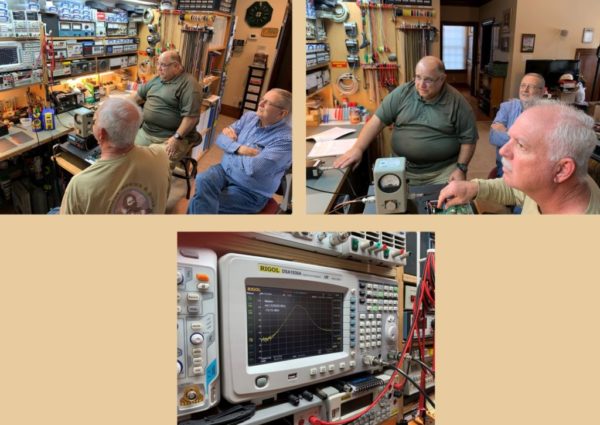