In late 2017 Bill NR4C, our club’s Member at Large, made a recommendation that the club establish and sponsor an award to be presented annually that would recognize a ham in the local area who made the most significant contributions in support of both local amateur radio operators and our civilian community during the past year.  Bill’s recommendation called for us to establish the award in honor of Jim Bailey KB4ZIN who passed away in April 2017.The club leadership agreed, the award was approved at a general membership meeting and the president appointed a committee of five members to solicit recommendations from the membership and select the award’s recipient. 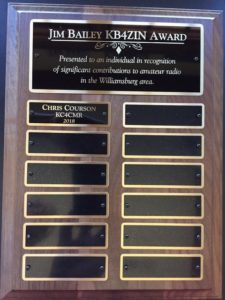 The plaque awarded to recipients of the KB4ZIN award. The recipient gets to hold the plaque for one year.

Each award recipient has their name placed on a plaque which the recipient gets to keep for a year. The recipient also receives a trophy consisting of a microphone that they can keep permanently.

The trophy given to the recipient of the KB4ZIN award that they can keep permanently.

James William (Jim) Bailey, was born in Kalamazoo, Michigan, on Nov. 15, 1931, to Robert and Freda Smith Bailey.  Jim graduated from Western Michigan University in 1951 and during his career at the U.S. Army’s Diamond Ordnance Fuse Laboratory in Washington, D.C., he pioneered the development of the Army’s first missile ordnance delivery system.  Later at NASA’s Goddard Space Flight Center in Greenbelt, Maryland, he managed the development of automated systems used to test and flight-certify spacecraft and their onboard scientific instruments.

He gave of his talents to the community in many ways.  For example, he developed electronic systems for the Freeway Airport in Bowie, Maryland, by designing and installing weather and communications equipment that enabled Freeway to become a state-of-the-art facility.  Jim would later go on to install a similar aircraft controlled remote landing light enabling system at our Williamsburg airport.

Jim began his electronics career as what we would call a “Maker” these days working in a radio store as a kid fixing radios.  During WWII when everything was in short supply Jim began his life-long affinity for gathering electronic parts for present and future projects and became a reliable component supplier and technical advisor to the ham community here in Williamsburg.  Jim loved to build both ham radio and non-radio related electronic projects and collect vintage equipment.

Originally licensed as K3SSF Jim built his first 6m AM transmitter with a tube final while he worked at the Goddard facility.  As for many of us life got in the way and he had a 25-year lapse as a ham.  But in June 1987 our club welcomed Jim back to ham radio with his shiny new call sign, KB4ZIN.  In 1987 Jim built and installed the first wide-area coverage 2m repeater system in Williamsburg, the 146.76 machine, which as we all know remains in active service today.  Jim believed that having a autopatch connected to his repeater was another important service he could offer to the community and actually built a homebrew repeater controller and autopatch system using 7400 series logic integrated circuits.  He later installed the 440.10 MHz repeater in 1993 and our second area 2m repeater on 147.105 MHz in 2000.  During local and state emergencies, Jim’s repeater network is used by the Amateur Radio Emergency Service for emergency communications and, during times of severe weather, the SKYWARN network gathers and provides local severe weather information to the National Weather Service.  Over all these years Jim’s repeaters have also supported scores of community public service events.  At Jim’s insistence his systems have always operated without a PL tone to ensure that all visitors to our area had immediate access to the local repeaters without having to search for a required tone.   Jim served as Vice President of the club in 1988 and was a continuous member of WAARC since 1987.  Five members of Jim’s immediate and extended family also became licensed hams.

Jim passed away on April 5, 2017 but his legacy lives on with his call sign KB4ZIN now assigned to the Williamsburg Area Repeater Network, a group of local hams, who will continue to operate and maintain Jim’s repeater network.

Recipients of the KB4ZIN Award