Will, K4MIPosted on January 15, 2020 Posted in Uncategorized

At the club meeting on January 14 WAARC held its annual election of officers. Congratulations to the new officers for 2020. 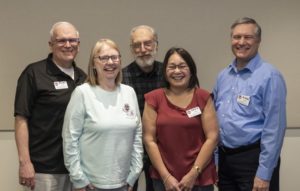 A big thanks to the outgoing officers for their work over the past few years. Dino (President), Chuck AI4WU (Vice President) and Bill NR4C (Director At Large) have all helped to advance Amateur Radio in the Williamsburg community and the club appreciates their dedication.

Also, big thanks go to Cynthia K4CEF for her efforts in assembling a slate of officers for this year’s election. This was the first time in many years that there was a contested election for multiple positions. It would not have been possible without her work as the nominatio